Neuronal Stimulation For Recovery of Function

Approximately forty million people across the world suffer from blindness. The loss of vision is devastating and greatly reduces one’s autonomy and quality of life. NESTOR, a consortium funded by the Netherlands Organisation for Scientific Research for Applied and Engineering Sciences, aims to develop a revolutionary method to control brain activity and restore visual function in blind people. NESTOR will develop the world’s first large scale, chronically implanted, wireless device that imparts clinically relevant visual patterns directly to the visual cortex. The aim is to develop a prosthetic that allows blind people to use their eyesight again.

The project aims to create a cortical visual prothesis with a large number of electrodes that will be inserted in the visual cortex. By giving electrical pulses at specific locations a blind person will be able to see small articifical percepts. Some of the aims of the proposal are to research algorithms for the extraction of the most useful features from the camera stream to be imposed on the visual cortex and to optimize the delivery of patterned stimulation to the visual cortex. The contribution of VicarVision will be to help present visual information, such as facial expressions, from AI systems to cortex tissue in an efficient way. 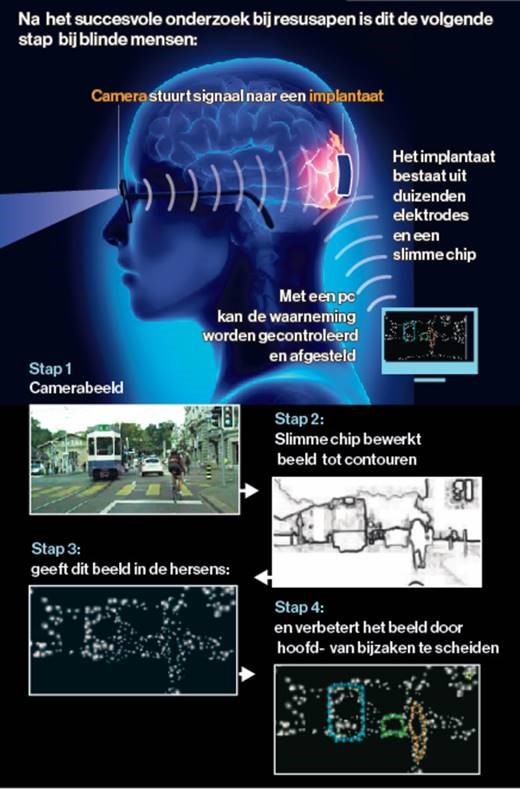 After successful research in rhesus monkeys, this is the next step in blind people:

The camera sends a signal to an implant.
The implant consists of thousands of electrodes and a smart chip.
With a PC, the perception can be controlled and adjusted.